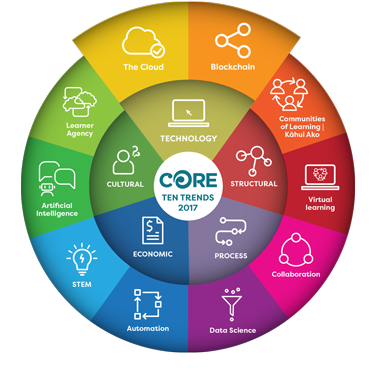 By allowing digital information to be distributed but not copied, blockchain technology is creating the backbone of a new type of internet.

Imagine a future where a student’s record of learning is held in a form that travels with them throughout their life, in a form that they can manage and make accessible to others as required for, say, a job application or evidence of achievement towards a Master’s degree. This is not a new idea. Similar dreams have driven the development of e-portfolios in the past, however the limitations around privacy and longevity of such technologies have always been an issue. This is one example of where the blockchain may emerge as something to watch for into the future.

While the blockchain itself may not be as commonly known, it is the ‘engine’ that drives the ‘bitcoin’, a type of digital currency in which encryption techniques are used to regulate the generation of units of currency and verify the transfer of funds, operating independently of a central bank. It is the use of these encryption techniques together with the way it operates as a distributed database that makes the blockchain a potential disruptor in education.

Across a range of areas in our education system, issues associated with the management of information, including identity and access management, security and sustainable access are areas of concern to policy makers, teachers, and school leaders alike.

For example, finding a solution that enables individual learners to manage their own learning and the accumulation of evidence that demonstrates achievement has become something of a ‘holy grail’ in education, as we have made the shift to the self-directed, personalised learning paradigm. The challenge of finding ways of verifying the authenticity of a student sitting an exam or completing an assessment task online is another example of where our current approaches are limited.

This is where it may become useful as a means of enabling individual students and educators to maintain records of their own learning. Because each transaction on the blockchain is signed digitally using public key cryptography, it is impossible to ‘crack’, thus ensuring both security and sustainable access.

In addition to the examples of support for personalised learning and validating assessments mentioned above, other ways the secure database provided by the blockchain may be of benefit to education include:

This will be of significance to organisations such as the Education Council as they put in place processes to give effect to their teacher standards and teacher registration, including recognition of teachers coming to New Zealand from overseas.

Management and tracking of school assets

Keeping track of school assets has never been easy, but use of the blockchain creates opportunities to not only track assets but also look at managing things like the insurance of these things through smart contracts.

Based on how identity is managed on the blockchain, it is conceivable that such a system could provide parents and students with much more fine-grained control of who and under what circumstances their information is shared.

Distribution and payment of student loans

This could include support for various repayment options.

The use of the blockchain within education has the potential to significantly disrupt many of the things we currently do and the ways we currently do them in our schools and our education system generally. The best way to prepare ourselves for this change is to spend time thinking about which of these may be usefully impacted using the blockchain, and to pro-actively plan for how such a transition may occur when that time comes. Some questions to act as a stimulus with your colleagues include: