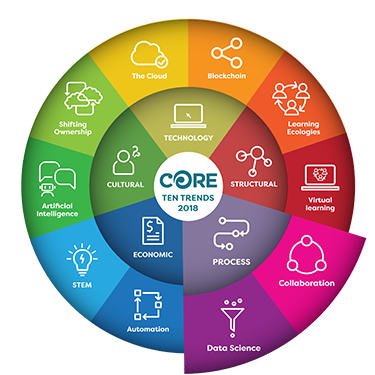 Collaborative approaches are foundational to effective pedagogy in education, as well as in the way schools themselves function in an increasingly networked world. The ability to work effectively with others is a key element of employability and a key desirable outcome of a successful educational system. Those who can work in teams and who can use and promote a ‘collective intelligence’ are often sought-after employees, as well as effective leaders in education and business settings. This means there is a real urgency to learn how to work collaboratively as well as collaborative practice underpinning effective education.

Collaboration is different to cooperation. Collaboration requires working with specific intent, an agreement to a common purpose or goal, and to a common way of achieving that. Fullan (2013) describes the collaborative power of a group as social capital that along with the talent of individuals (human capital) and the wisdom and expertise to make sound judgments about learners that are cultivated over many years (decisional capital) are the anchor stone of professional capital — the capital that is found in countries that are more equal, higher-attaining, healthier in just about every way that counts. Teachers in these countries are nation builders, as they social cohesion, and social justice.

Collaboration is built on a foundation of mutual trust and respect. There is an underpinning expectation of vulnerability and exposing one's own practice to critique and feedback. The focus is generally on improvement, and often some form of critical reflection (formal or informal) supports the development of collective skill and expertise. Through working closely together and working towards a well-understood and aligned vision, members of a team can maximise their efforts. There are explicit and implicit ways of working that value ‘positive abrasion’1 and encourage diversity of thought and new ideas.

When working collaboratively individuals and whole organisations can more effectively:

Our world is becoming more complex, requiring the collective intelligence of the many to address the ‘wicked problems’ we face on a day-to-day basis — most of which are beyond the capacity of any individual. We see this reflected in the way the modern workforce is organised — the work used to be the domain of an individual, now there are teams involved using their respective strengths and abilities, to achieve the common task.

Educational institutions are certainly not exempt. Embracing collaboration must be fundamental to the way these organisations work. It is not sustainable for individual teachers to assume responsibility for the wide range of tasks and roles expected of them in the past – ‘isolated’ in the way they operate with groups of students in individual classrooms. Individual schools cannot continue to operate in isolation, competing for resources, staff, and students. Education into the future must be fundamentally more collaborative at every level.

A second significant driver from an educational point of view is our understanding of collective teacher efficacy (CTE), which refers to a staff’s shared belief that through their collective action they can positively influence student outcomes. With an effect size of 1.57, CTE is ranked as the number one factor influencing student achievement (Hattie, 20162). According to the Visible Learning Research (Table 1), CTE is beyond three times more powerful and predictive of student achievement than socio-economic status. It is more than double the effect of prior achievement and more than triple the effect of home environment and parental involvement. It is greater than three times more likely to influence student achievement than student motivation, concentration, persistence, and engagement.

Collaborative activity is growing in several areas of our education sector. Often, they are organisations that reaching into schools as they see that through working together on local, national, and global issues there will be better outcomes for all.

The shift to a truly collaborative culture in schools presents significant challenges within a system that has been traditionally very hierarchical.