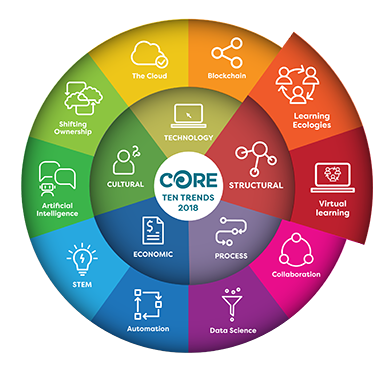 For a long time schools have been regarded as independent – almost ‘insular’ – places where teaching and learning takes place. We ‘send’ our children to school or we ‘go’ to school to learn, in much the same way as we ‘go’ to work (our place of employment) or ‘go’ to the dentist etc. Certainly, since the reforms of 1989 in NZ, the policies and resourcing from central government have reinforced this notion of ‘schools as stand-alone entities.

Increasingly, the pressure to operate in this way is creating strains on our education system, with the concept of ‘self-contained’, insular schools becoming increasingly at odds with the increased ‘connectedness’ that characterises how we operate in so many other areas of our lives – particularly in an increasingly networked world.

Our traditional focus on schools and schooling has more often focused on the structures that support the institution, rather than the activity that supports the learning. Where it has focused on the learner and learning, the notion of the school as being the place where learning happens has often ignored the fact that learning happens in many other contexts, and that this learning is transferred into and out of the school setting.

The notion of a learning ecology places the emphasis directly on the learner and learning, and maps the multiple connections and interactions they have that contribute to making learning happen for that individual, and collectively, for that cohort – or society.

A useful way of understanding this is to compare the definition of an ecology in the conventional (biological) sense, with how those characteristics play out in a learning ecology – as illustrated in the table below:

Like many system innovations the emphasis on learning ecologies has a number of drivers, including:

Recognising that hierarchies and bureaucracies are no longer able to support and enable the flourishing of individuals and organisations in the modern world. The metaphor has shifted from an industrial/structural one to an organic/ecological model.

While educators would argue a focus on individual learner ahievement has always been at the heart of our system view, our record of success shows we still have a “Long tail” of underachievement in New Zealand. They key thinking here is to address the ‘lumpiness’ in the experience of so many learners as they progress from early years through primary schooling and on to secondary by providing a more ‘joined-up’ approach at all levels.

The provision of public education costs money, and ensuring this is spent efficiently and effectively is a concern of any government. There is a lot to be gained, and efficiencies to be gained, from the sharing of resources within and between schools, including staffing expertise, governance expertise as well as curriculum resources.

Offering alternative pathways for professional growth and development to the traditional hierarchical positions – and thereby building a strong body of professionals in education.

There are many examples of this “networked learning” in the recent history of New Zealand education.

Since the introduction of the initial ICT strategy for schools in 1989 the basic model upon which the centrally funded professional development was based revolved around self-identified clusters of schools collaborating to work on developing the ICT skills and capabilities of staff.

Shortly after that the government provided funding to clusters of schools in the initiative known as Extending High Standards Across Schools, enabling clusters to explore and implement programmes aimed at raising achievement.

The emergence of the Virtual Learning Network Community in the early 2000s saw a strong focus on the development of clusters as agents of change, with the LCO handbook published to provide guidance for newly forming clusters.

Around the same time a group of schools in the Tamaki area in South Auckland began collaborating with the express purpose of raising student achievement, utilising, among other things, a high level of digital technology to engage learners and their families in the process.

Auckland University then led a project called Learning and Change Networks developed to accelerate achievement for students yet to achieve national expectations for literacy and numeracy, working with networks of schools to achieve understandings of how this can occur. Brian Annan’s work with Learning Maps was a pivotal part of this.

Through this development the gradual shift in focus from schools and teachers to students and their learning is what is now captured in the current strategy known as Communities of Learning. A key point of difference (in most cases) is the requirement that clusters are geographically formed, enabling a coherent continuum of experience for the learner across all levels of the system.

These examples focus on the relationships between and among schools themselves, but as we increasingly recognise the importance of the communities in which these young people and their families live, and the multiple organisations and agencies that touch their lives and how these things contribute to who they are as learners, then we need to be cognizant of how these things are also a part of the learning ecology within which the school exists.

Across New Zealand there are a growing number of examples of community initiatives that are attempting to bring together these various parts of the ecosystem that touch the lives of learners. Some are being led out of regional economic development agencies, others from iwi organisations and yet others from not-for-profit organisations acting on behalf of these groups. The integration of some health, welfare and justice services with schools is another example of the ecosystem awareness that is growing across the country.

The emergence of an ‘ecosystem’ mindset is connected strongly with the increased focus on placing the learner at the centre of her/his learning. This implies less of an emphasis on schools being a ‘deliver channel’ for a pre-determined ‘package’ of education, and more on defining and responding to the needs of individual learners -taking account of their cultural, social, economic and health needs among other things.

In light of this, schools should be actively seeking out ways of becoming more integrally connected with the communities they serve - not simply by ‘opening their doors’ and inviting some of these other groups in (although that is a good start) – but also by becoming a part of some of these initiatives, seeking true partnership arrangements where appropriate.

For example, in areas where prevalent health concerns prevent students from functioning as well as they might in their learning, some schools are establishing health clinics within their school environs, providing parents and caregivers an opportunity to seek medical assistance where their circumstances may otherwise have made this a barrier.

Another example might be a secondary school keen to maximise opportunities for students to learn at a high level in areas such as science and technology, who partner with local tech companies who can provide access to the facilities, materials and expertise that would otherwise be beyond the scope of the school to provide.

The key in these relationships is the reciprocity that exists – it’s not about schools putting their hands out and being the beneficiaries of the generosity of others, but of everyone working together to achieve something that would not otherwise be achieved by any individual group or organisation.

Some questions to help you think about the next steps here